By David Von Behren
(Written circa 2003)

Editor's note: Dr. Albert L. Picchioni, founder of the Arizona Poison and Drug Information Center, passed away April 16, 2012. In his honor, the following story has been left as it was originally written.

The phone calls started coming in almost as soon as Albert L. Picchioni, PhD, arrived to teach at the University of Arizona College of Pharmacy. The year was 1953 and the college was barely six years old, but already physicians across southern Arizona were turning to the college as a valuable resource. Doctors were seeing young patients suffering the poisonous effects of household cleaning products. A lack of good information on those products was becoming a deadly problem.

"This was not long after World War II and a lot of new products were coming on the market and getting into the hands of kids, but in those days you didn't know what was in the product because there were no ingredients listed on the labels," says Dr. Picchioni. 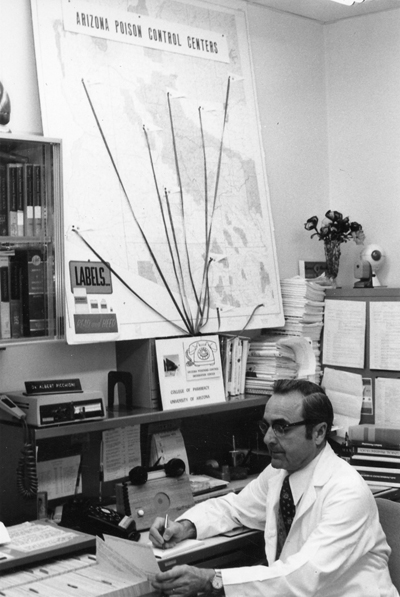 Building a data base

With the help of faculty volunteers, Dr. Picchioni developed a card file listing ingredients in household products. Pharmacy faculty regularly improved the information, keeping a copy of the card file at the College and one at home--volunteering to answer emergency calls after hours. By 1955, calls were coming in at the rate of about seven a week, forming the nucleus of the first center of excellence at the College of Pharmacy.

"By the time 1960 rolled around, we had thousands of products listed with their ingredients, and being pharmacologists, we also added symptoms of poisonings and any antidotes that were available," says Dr. Picchioni.

The information in the card file became so vital it was duplicated and distributed to hospitals across the state.

"Once the word started getting out the calls just kept coming and never stopped," says Dr. Picchioni.

The poison center continued to grow, but remained a volunteer effort among pharmacy faculty and students through the 1970s. Along with answering growing numbers of calls, the center forged a research focus in toxicology, including some of the earliest studies on the use of activated charcoal as an antidote for poisonings.

"We continued teaching poison prevention to parents and schools which helped develop a strong community recognition of the value of the poison center," says Dr. Tong.

The prevention message continues on the center's web page and in thousands of brochures, pamphlets and telephone stickers given out each year. Talks to civic and community groups, schools and health care professionals across the state provide a constant reminder of the power of poisons and the importance of prevention.

Dr. Picchioni's original card file is still housed in the poison center--a humble reminder of how a handful of phone calls grew into an around-the-clock life-saving resource for millions of Arizonans. 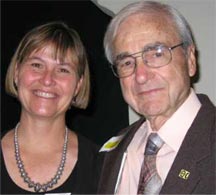 "Our card files eventually gave way to the Toxicall computer information system which allows us immediate access to detailed information on hundreds of thousands of medicines and household products," says Jude McNally, RPh, DABAT, former managing director of the center.

"The computer is faster and holds more information, but it's the same type of poison prevention data pioneered by Dr. Picchioni," says McNally.

The center's expertise has expanded beyond household products and drug medications to a world-recognized knowledge of bites and stings from venomous creatures.

As a professor emeritus, Dr. Picchioni remains active with the college and the poison center.

"It's amazing how it grew from a strictly volunteer effort among the early faculty into one of the best poison centers in the country," says Dr. Picchioni.

"All we knew when we started was that people needed help, and I think that spirit of dedication has always been a part of the poison center and the College of Pharmacy." 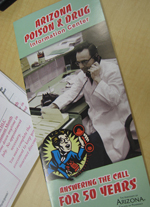 Request a copy of the brochure that tells more about the center's history. The publication includes a timeline of poison center milestones. Be sure to give us your name and all the necessary address information to mail your copy.