Arthropods are organisms that have segmented bodies, a jointed skeleton and paired jointed limbs. They include such creatures as spiders, centipedes and insects. More than 4,500 arthropod bites and stings are reported to the Arizona Poison and Drug Information Center each year. 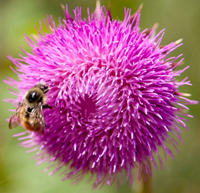 Bees have a barbed stinger at the base of their abdomen which carries their venom. The bee forces the tip of the stinger through the skin of the victim and leaves the stinger, poison sac and attached muscle in the victim's skin. It may take hundreds of bee stings to inflict a fatal toxic dose of venom in a healthy adult. However, one sting can cause a fatal allergic (anaphylactic) reaction in a hypersensitive person. Africanized bees or "killer bees" have now invaded many parts of the United States, including Arizona. Although their sting is treated the same as other bee stings, these bees are very aggressive and much more likely to attack when threatened.

The honey bee's stinger is barbed and will frequently be left by the stinging bee. The venom sac attached to the stinger may continue to inject venom even after the bee has flown away.

For many years it was recommended that bee stingers be removed by scraping. Now we know that the bee's stinger should be removed within seconds of the sting by any possible means.

The patient should observe closely the progression of symptoms, especially in the first hour following the sting. Mild local symptoms may be relieved by taking antihistamines. More severe or rapidly progressing symptoms may require aggressive, life-supporting therapy in a healthcare facility. Patients demonstrating hypersensitivity should obtain an emergency kit to be carried at all times.

A mature female is a globe-shaped, black, shiny spider with a red or orange marking or hourglass on the underside of her abdomen. Males are smaller, brown and not a significant threat to people. A strong, irregular web indicates the presence of a black widow spider. They weave egg sacs which may contain up to 300 eggs. Removal or destruction of the egg sacs may help control the population. This spider is resistant to many insecticides.

The initial sensation may be painful, with little local reaction. Later, pain, cramping and stiffness may appear in the shoulders, back, chest or abdomen. Other symptoms include nausea, vomiting, headache, anxiety and high blood pressure.

Clean the site well with soap and water. Apply a cool compress over the bite location and keep the affected limb elevated to about heart level. Over-the-counter pain relievers may be used to relieve minor symptoms. Treatment in a medical facility may be necessary for children less than 5 years old or for adults with severe symptoms.

This non-aggressive spider is found in dry, littered and undisturbed areas such as closets, woodpiles and under sinks. Bites often occur when the victim puts on clothing in which a spider has been hiding. This spider is light tan to brown with a violin-shaped marking on the back of the head-chest region. With legs extended, it is approximately the size of a nickel to a quarter. Sometimes it is mistakenly referred to as the Brown Recluse; the Brown Recluse resides in the Midwest.

Generally, a patient experiences little or no local pain at the time of the bite. However, localized pain may develop in the first few hours. The site may become inflamed. Blister formations may develop as early as 12 hours to several days following the bite. This site will evolve into what has classically been described as a "bulls-eye lesion" with a dark center (dead skin) outlined by white and set on a red and inflamed background.

The healing process is slow, often taking months, and leaving a scar which may require reconstructive or cosmetic surgery. In addition to the local effects, systemic flu-like symptoms, including nausea, vomiting and malaise may appear in the first 24 hours.

Keep the site clean with soap and water to prevent infection.

Call 1-800-222-1222 if you think you have been bitten. Medical treatment is always advised when a brown spider bite is suspected. 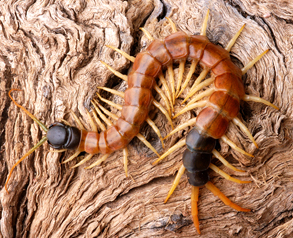 Centipedes have an elongated, segmented body with each segment bearing a pair of legs. The name inaccurately implies one hundred legs when, in fact, the number of legs varies between 20 and more than 100. They range in length from 1 to 9 inches.

A centipede bite will cause local inflammation and pain. Symptoms are frequently short-lived, lasting only a few hours. Although cases of persistent tenderness lasting for several weeks can be found, they are extremely rare.

Many centipede bites can be treated at home. If the pain is severe, or lasts longer than 12 hours, relief may be found in an emergency room or urgent care facility.

Arizona has four species of conenose bugs known by many common names. These are parasites frequently residing in rodent nests. They may be attracted to our homes at night by outside lighting and take refuge inside at dawn. Once inside, they will appear at night to feed on us or our pets. They are approximately 1/2 to 1 inch in length with an elongated cone-shaped head.

Typically, no pain is felt at the time of the bite. Sometime later, a local reaction including pain, redness, swelling and itching may occur. Later bites may lead to sensitization and all levels of allergic reaction, including life-threatening ones.

Keep the bite sites clean with soap and water.  Emergency allergy kits often are prescribed for patients who suffer severe reactions to use in case of future bites. These reactions require medical treatment.

These are the gentle giants of the spider world. But when adequately provoked, they will bite and their impressive fangs can produce painful puncture wounds.

Hairs located on the tarantula's abdomen act to discourage predators--these hairs can cause itching and burning if a person comes in contact with them.

Bites are unlikely to cause problems other than pain at the site. Skin exposure to the hairs on the abdomen will cause itching and a rash.

Clean the bite site with soap and water and protect against infection. Skin exposures to the hairs are managed by removing the hairs with tape. There is a risk of tetanus from a bite, so be sure your tetanus vaccination is up-to-date.